NOTE: If viewing on a cell phone, landscape mode is recommended.

The MC-CQ-4X incorporates four MCDC-series motor controllers and provides connectivity and packaging suitable for ease of use and rapid deployment in desktop, bench top and industrial automation applications.

The MC-CQ-4X integrates seamlessly with IMS Motion Console software, eliminating the need for software development in many applications incorporating one to four axes of motion so your system is up and running in minutes.

Setting a new standard in automation interface software, IMS Motion Console gives you the power to command your system's operation instantly, with no programming. Whether you're pushing the frontiers of scientific research or integrating precision industrial systems, Motion Console delivers the features that get you effortlessly connected to your objectives.

With Motion Console, multi-axis position sequences may be executed directly from the embedded spreadsheet by entering position data and clicking the run button. Additional spreadsheet columns may be configured to hold sequence timing and flow control commands as well as serial communication transmission and response data, providing control not just of motion hardware but of a virtually unlimited range of RS-232 and RS-485 devices.

Motion Console includes a four axis wireless or wired joystick control interface, a video interface for DirectShow and DCAM compatible cameras, powerful and easy to use system configuration capabilities, an optional API and a variety of other features that come together to make system automation easier than you ever thought it could be.

The information contained on this website is subject to change without notice. Critical dimensions or specifications should be verified with our technical support staff. 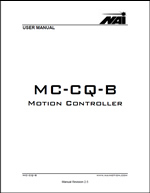